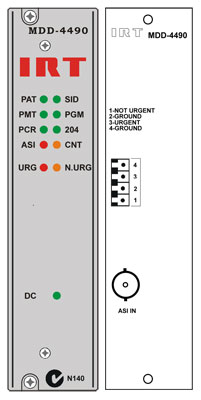 - Raises an alarm if its input MPEG stream fails.
- Raises an alarm if the ASI Transport Stream is not the correct stream as indicated by its stream ID.
- Raises an alarm if a particular program number is missing from the stream.
- Monitors a number of the parameters of first priority measurements of ETR290.
- Front panel alarm LEDs and rear panel urgent and non-urgent relays.
- SNMP Monitoring capability.

There are 5 green status LEDs named PAT, SID, PMT, PGM and PCR. These five should be illuminated in the presence of a valid Transport Stream. 204 is another green LED that lights when the input signal is a 204 byte packet length signal. CNT is an amber LED and lights on a Continuity Count error. ASI is red and indicates a failure of the Transport Stream.

There are two relays whose contacts are available on the rear assembly. They are labelled Urgent and Non-Urgent. If the Urgent relay operates then the red URG led on the front panel will light. If the Non-Urgent relay operates then the amber led NON will light. Each of the relays can be selected (by dip switches) to operate on any or all of the error states of any of the seven status LEDs.