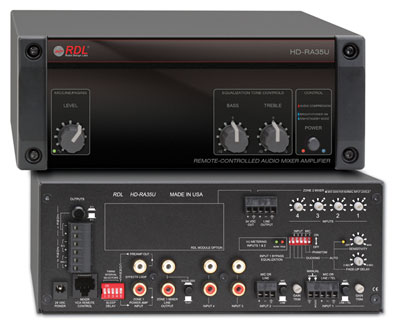 
The HD-RA35U is a four input audio mixer amplifier for systems demanding the broadest range of features and the highest energy efficiency. Two output power amplifier zones, 35 watts (Zone 1) and 4 watts (Zone 2), are driven from high-efficiency Class D amplifier stages. The mixer and amplifier sections all normally shut down (standby "sleep" mode) when audio is absent and automatically turn on when needed. A paging source is normally connected to Input 1. The Zone 1 amplifier output level for inputs 2, 3 and 4 is VCA controlled using various optional RDL remote controls. This allows the user controls to be conveniently wall mounted without running audio to and from the remote control location. The Zone 1 output drives 4 ohm or 8 ohm speakers. The output impedance is switch-selectable on the rear panel. The Zone 2 amplifier output drives an 8 ohm speaker and/or 600 ohm telephone equipment.

The HD-RA35U is engineered, tested and manufactured in the U.S.A. to strict energy conservation standards. The unit consumes less than 1W of mains power in standby mode, and meets power amplifier efficiency specifications with analog-filtered Class-D digital output stages for both power amplifier output zones and for the 600 ohm output.

The HD-RA35U features two mixers. The Zone 1 mixer is split between the front-panel (Paging Input 1 and tone controls) and a remote control (Inputs 2, 3 and 4) providing user level controls for the 35 watt amplifier output. The tone controls adjust the equalization at the Zone 1 amplifier output and can be switch selected on the rear panel to also adjust the equalization at the line-level output. The Zone 2 mixer on the rear panel provides level trimmers normally set by the installer to provide music-on-hold and/or for background music in a small zone equipped with an 8 ohm speaker. The Zone 2 section includes a 4 watt amplifier, a 600 ohm transformer-balanced MOH output, and an active balanced line-level output that may be used to feed another audio power amplifier.

The HD-RA35U has four inputs that are common to both mixers. Inputs 1 and 2 accept balanced mic or line level sources. Inputs 3 and 4 accept unbalanced mono or stereo line-level sources.

The presence of a signal on any of the inputs causes the HD-RA35U to fully turn on, activating both Zone 1 and 2 power amplifiers and all associated mixing, equalization and compressor circuitry. When input signals are absent, a delay timer is initiated. Rear-panel DIP switches are provided to set the power-down delay timer to a value between 10 minutes and 2 hours in 10 minute increments. After the time-out period, the HD-RA35U enters the sleep mode until an input signal is received. The switches may be set to disable the sleep mode for systems specifying continuous amplifier operation.

The HD-RA35U is equipped with an RJ45 jack for direct connection of an RDL triple remote level control (sold separately). Remote controls have three user volume controls and are available with pushbutton muting with LED indicators for each input. Remote control model examples: D-RC3 and D-RC3M. A rear-panel switch is provided to defeat the front-panel tone controls for Input 1, normally used when a paging source is connected to Input 1.

The Zone 1 amplifier includes an analog compressor/limiter for audio fidelity noticeably superior to conventional class D amplifiers with digital limiting. Increasing the input gain can substantially increase the average output power beyond that of a standard 35 watt amplifier. A red front-panel LED flashes when the compressor is preventing output clipping. Normal audio level signals remain unaffected by the compressor thereby preserving audio dynamics. The audio is compressed according to three dynamic time constants providing aural transparency while maintaining clean, unclipped amplified audio for input overloads of up to 20 dB. The HD-RA35U, with compression, is capable of producing average audio output levels and clarity normally expected from amplifiers with a much higher output power rating.

A blue POWER LED illuminates when the HD-RA35U is powered from its external 24 Vdc power supply (included). The power LED is dim when the mixer amplifier is in the standby mode, and is bright when the amplifiers are fully active. A front-panel pushbutton is provided to manually cycle between standby and active modes. The power amplifiers are equipped with both thermal and output short-circuit protection. The high-efficiency Class D output stages produce minimal heat for all levels of expected voice or music modulation.