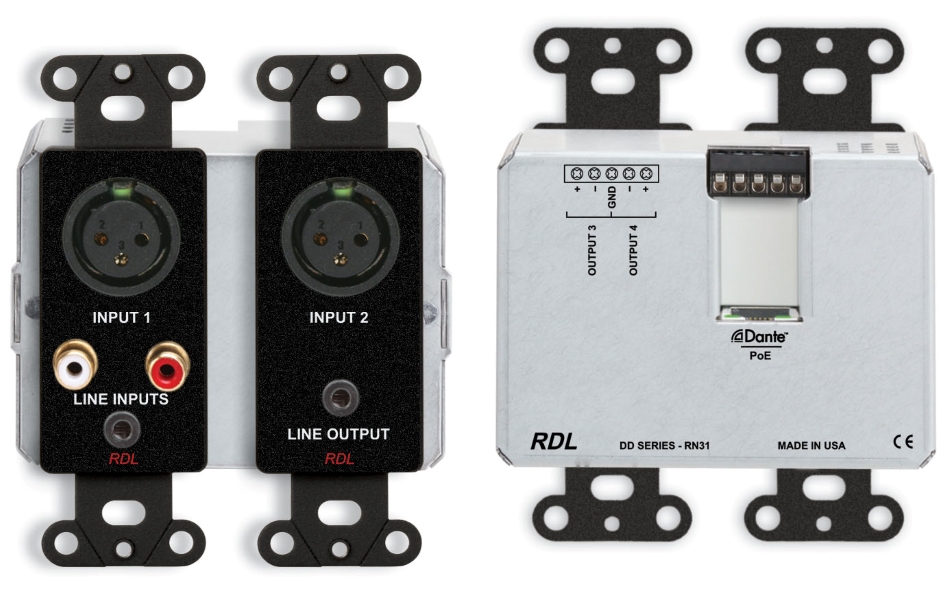 
The DD-RN31 is a complete wall-mounted Dante audio network interface. It features two XLR mic or line inputs, one stereo Mini-jack line input, left and right RCA jack inputs and one stereo Mini-jack line output on the front panels, plus two line outputs on a rear-panel detachable terminal block. The module is configured and adjusted using RDL CONSOLE or other network control software. The DD-RN31 fits a standard US dual-gang electrical box or an RDL WB-2 back box for installations in thinner European or equivalent walls. The DD-RN31 is PoE powered, and is available in multiple finishes with optional customized graphics.

Mic/Line to network section
The two XLR inputs are each converted to a separate Dante network transmit channel. Gain settings are software-selectable for both the mic and line input ranges to match condenser or dynamic mic levels and standard line levels. P48 phantom voltage may be software enabled when an input is set for mic level.

Line to network section
The Mini-jack and RCA jack left and right inputs each provide a network digital audio level of -18 dBFS for an unbalanced -10 dBV input. The control software allows each of these inputs to feed either or both of two Dante channels. Multiple sources fed to a single Dante output are summed.

Valid PoE power and synchronization to the Dante network are indicated by green LEDs visible from the front of the unit.

The DD-RN31’s superior performance specifications make it ideally suited to the most demanding installations, and an exceptional value in commercial networked audio systems. This full-featured product is engineered and manufactured in the U.S.A for continuous duty in demanding installations. Designed to outperform. Built to last.